“You ain’t been to China”

Was to 8 international airports

Coughing around the clock

“Go to the E.R. if distressed”

‘Cause no testing goin’ on

Ain’t nothing to see

We ‘Mericans have nothing

To fear but foreigners

And them their flu

I got God on my side

In my back pocket! 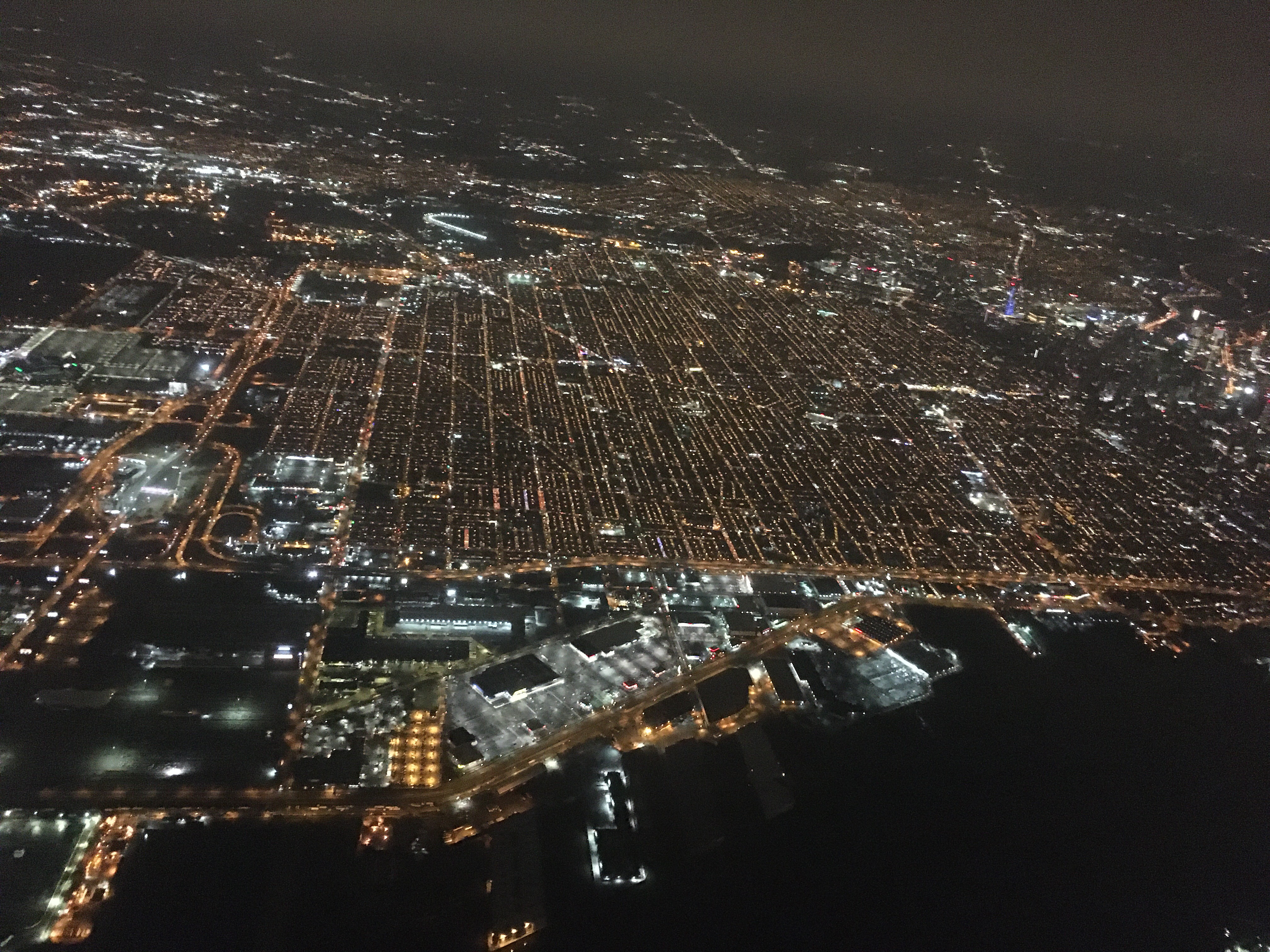 never mind
its my selfie parade!
look at me
im just so wonderful
with all these things
surrounding me

im a blue screen idol
your personal brand aide
helping you work through
life’s annoying realities
because in my posts
there’s no war or hate or pain
just me, me, me
showing off to you

i cant remember what i thought
must have been important once upon a Time in hollywood
enough for Weinstein’s perp walker (from coast2coast, his SexCrimes are the most!)

’cause guys only get raped in prison or in war
but i ain’t killed no General (so what’s that all about?)
& aint done no crime
but doin’ all this time

selfies are the binary microdots connecting our souls
i use to build my day
and send to you
with a simple typing of my fingers and, *CLICK*
the bait is set

all the while waiting, waiting, waiting
for your like, your heart emoji, and your words so rapidly tossed into cyberspace
that’s it’s really just your first superficial impulse
or maybe something longer that you’ve maybe even, yes, yes, proofed and edited

or shared across the So Me Universe, my memes, reactions, witty little put down
misappropriation of a So Me piece of So Me trash just drifting in cyberspace
going viral is the
So Me “O”
with millions of viewers taking less than five seconds from their wonderful lives as they drive, eat, breathe, shit, watch Netflix, piss, or just lie in bed
to connect the microdots and drop virtual acid in our world wide vapidity

So Me “O” over and over again

until the next meme comes along…

I’ve lived in the country for most of my 55 years. Ten years ago, I moved to rural Pennsylvania as a result of falling in love, literally following a dream, and wanting to provide my second wife, Rachel, with her fairy-tale small farmette.

Fairy-tale and small farmette notwithstanding, country life sucks because of my woodstove. I have heated with wood for most of this decade of rural imprisonment. During this time, I am proud to admit to having accidentally started one chimney fire and two separate grass fires. The fire department put out the chimney fire. Rachel and my children helped me put out one grass fire; I extinguished the other. The fire department arrived too late for both grass fires because they couldn’t locate the house. 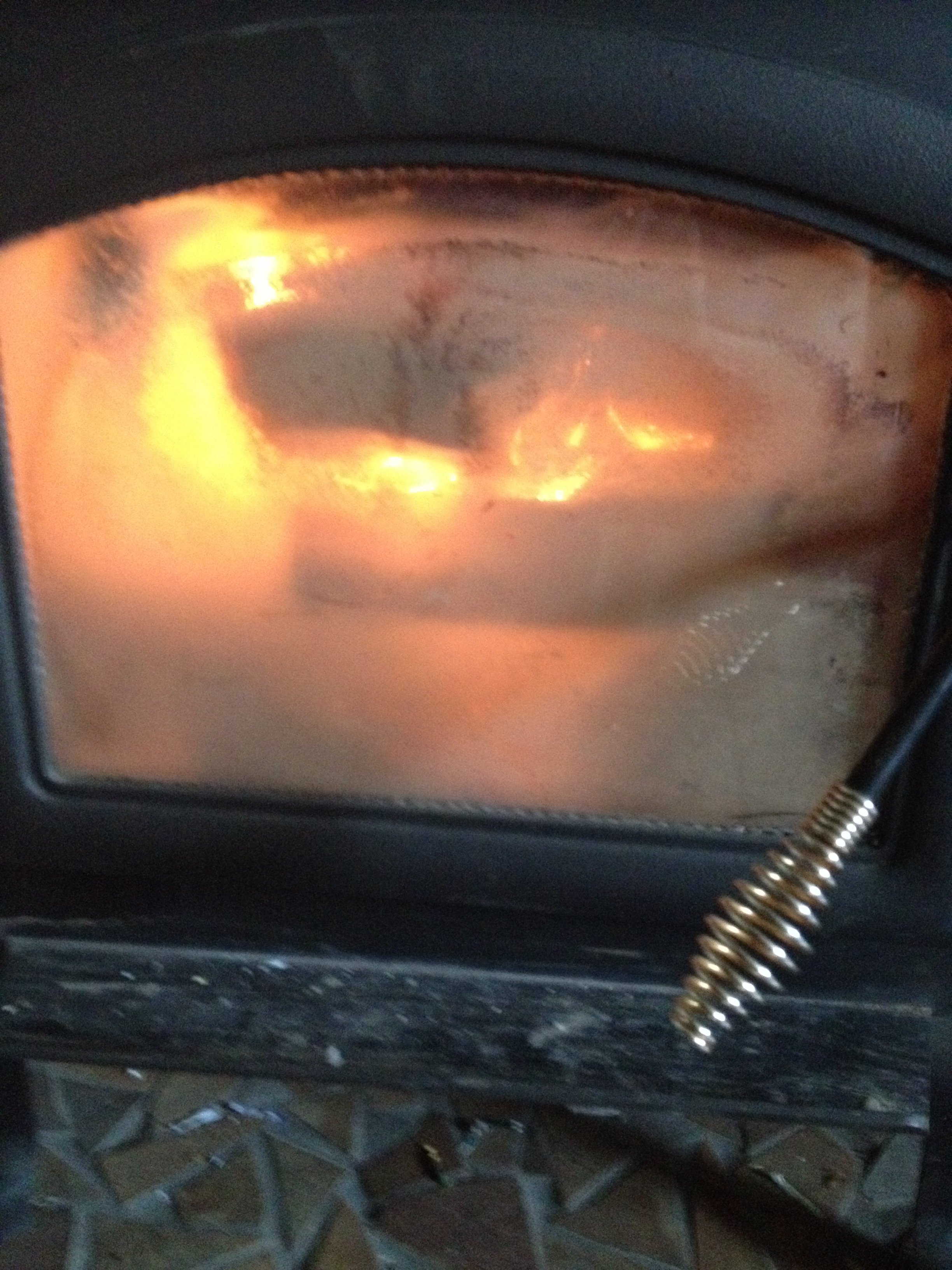 In the coldest part of winter the woodstove heats the basement to a toasty 80 degrees. Because I live in a split-level house, it’s common for the upstairs temperature in the winter to remain a barely inhabitable 60 degrees. Part of the reason for this disparity is that the house is surrounded by farmland. It’s common for my place to be buffeted by winds to the extent that the few trees on my property have a significant eastward lean. Here, rain never falls straight down. I also have a micro-climate; in the winter it is not unusual to encounter three foot-high drifts during a puny (six inch) snow storm. Such drifts are not a problem for most of my neighbors because they own tractors.

After I filed for a divorce from Rachel and she moved out with her AWD vehicle, I bought a snow blower. I ran it for a year before daily winter use resulted in my breaking the transmission linkage, the directional chute, and the tines. Even on a calm winter’s day, I have to battle drifts. I’ve experienced numerous days when I awoke at 5 AM, blew out my two hundred and fifty foot drive and left for work only to find it drifted over when I returned after dark. 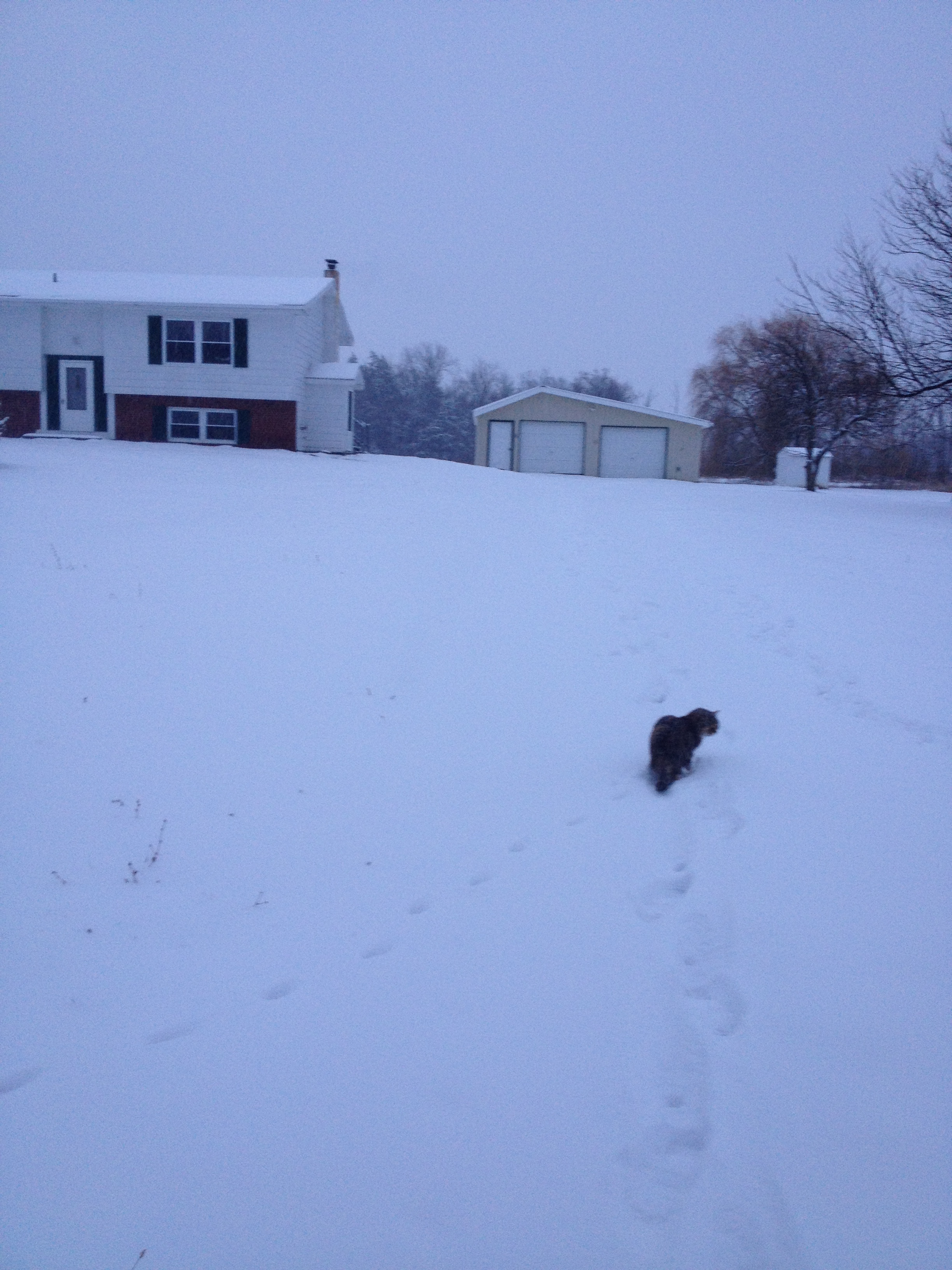 From November through April, I am chained to my house by the woodstove and my driveway. I eloped last year and entrusted the place to my 23 year-old son who works thirty miles away. I flew to Edmonds, Washington to visit my soon-to-be third wife, Kathy. When I returned to Pennsylvania, my son greeted me in the partially drifted-over drive; he looked like am Andean plane-crash survivor. He hugged me, packed his car, and left.

The country also has pretty animals, like deer. These graceful creatures dash out of the bushes as if fleeing a meth lab raid. They are beautiful even as they leap out of the deepest woods in front of my car. Late one summer night, one creamed my passenger door, stood and seemed to smile at me before it sprinted back into the woods.

Chickens are another animal best appreciated from afar. I enjoy brown eggs and Rachel suggested that we build a chicken coop. I found plans and built one with nesting boxes, wiring, and a nursery area. Our chickens laid delicious brown eggs, but there was price to pay. One night our 20 feathered friends went bitch crazy and pecked out the brains of six of their sisters. Worse than that, they pecked out a single eye of two more. Those one-eyed hens should have crossed over, but my wife insisted otherwise. For several months through winter we kept the wounded pair in isolation and nursed them back to health. Out of gratitude, the menopausal birds celebrated by trashing my flowerbeds and pecking my siding.

Country people love dogs. These uncivilized beasts chase cars, soil on everything, and bark at invisible deer. I don’t own one anymore. I once shared my house with three: they jumped on furniture and had to be taken out several times daily. And they needed to walk. A lot. About a mile a day; rain or shine. Walking a dog in the country means being fully prepared to be dragged along the road as it pursues small animals and passing cars.

Deer, chickens, and dogs are not the country’s only annoying creatures. In Pennsylvania, we also have the woodchuck or groundhog. Though celebrated as some sort of fat and furry fairy godfather who can predict spring, it’s actually an ugly and useless DNA gob. I’ve several living beneath my garage. My efforts to shoot them are testimony only to my horrendous marksmanship.

“Chuckie owns the lawn,” I whispered to Kathy one morning as she watched in a strange mix of fear and awe while I drew a bead on the world’s largest woodchuck. In my eyes, Chuckie stood four feet tall after he had crawled out from his lair. I tugged at my trigger. No shot rang out because I hadn’t deactivated the safety: Chuckie waddled through the tall grass back home, the entire fiasco affirming that guns don’t kill groundhogs and neither can I. 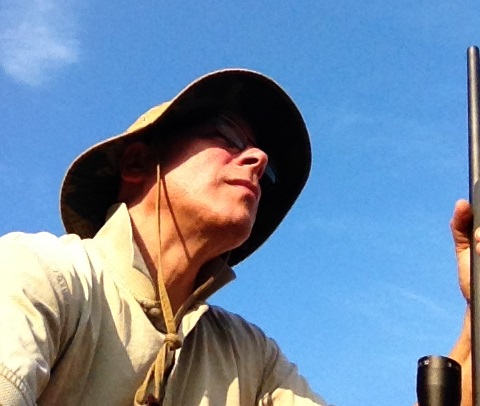 Now I spend my time between Windfall and Arizona, where Kathy lives. Our new home is 2200 miles wide. I’m leaving country life. Not because of the woodstove, the snow, or the animals, but because I realized shortly before my second divorce that I’m not a rural person. I also realized that my first two marriages were about my trying (and failing) to be perfect. Actually, living anywhere sucks when I’m trying to be someone I’m not. At my 35th high-school reunion, several ex-classmates asked, “How do you like Manhattan, John?” I laughed because they knew me much better than I did.

Anyone interested in buying a beautiful country home nestled on four acres with spectacular views and teeming with wildlife? If so, please contact me immediately. It’s heated by an economical and cozy woodstove and comes complete with appliances, weather station, generator with low service hours, and snow blower. It’s a great place for writing, communing with nature, raising children, and embracing solitude.

No reasonable offer will be refused.

Hitler or Jesus:
Which are you?
(Laughing Buddha knows.)

Shall I
Choose to lie at your feet
And
Worship
The Fuehrer
Or
The Savior?

Will your miracles
Reign
Only over men
Or
Over all of creation?

Can you save my eternal life
Or
Just my bank account and lifestyle?
I gotta know.

Tell me:
Is your Holiness
All
Self-proclaimed
Or
From God?

Have you ascended from Hell
With mere moments until your final descent
Or
Have you descended from Heaven
With an eternity to spend there?

Do your words bring truth, love, and salvation
Or
Are they merely deceptions manufactured
To allay my deepest fears?

Do you command vast armies
Or
Battalions of Angels?

Are you motivated by desire
Or
Of salvation and rebirth?

Laughing Buddha tells me.
He
Is not fooled
By the deceptions
Of
Your followers,
Whether they are working
To
Sanctify your evil
Or
Quoting scripture
To
Justify their own evil.

John David Higham, M.A., is a psychologist, Author, Reiki Master, and the creative force behind Empathic Perspective. Drawing from both his personal and clinical experiences has allowed him to survive and thrive while also helping those he encounters on his path.